When Apple decided to abandon Google Maps and create its own, users expected Apple to create the next generation mapping product. However, when Apple launched its maps with iOS 6, there were reports of multiple errors in Apple Maps. Collapsed bridges, wrong names, and non-existent landmarks were a few errors blown out of proportion by the media.

Do Apple Maps really suck? Are the maps unreliable? As an iOS 6 user, would I get lost without Google Maps?

The only way to answer these questions is for me to compare both maps using a user-centric approach. I decided to analyze the route from place A to place B using both maps. For my test, I chose two well-known landmarks in the Vancouver Lower Mainland, that is starting from the Metropolis at Metrotown Mall to the Waterfront Skytrain Station.

Apple Maps: Here is the route displayed by Apple Maps: 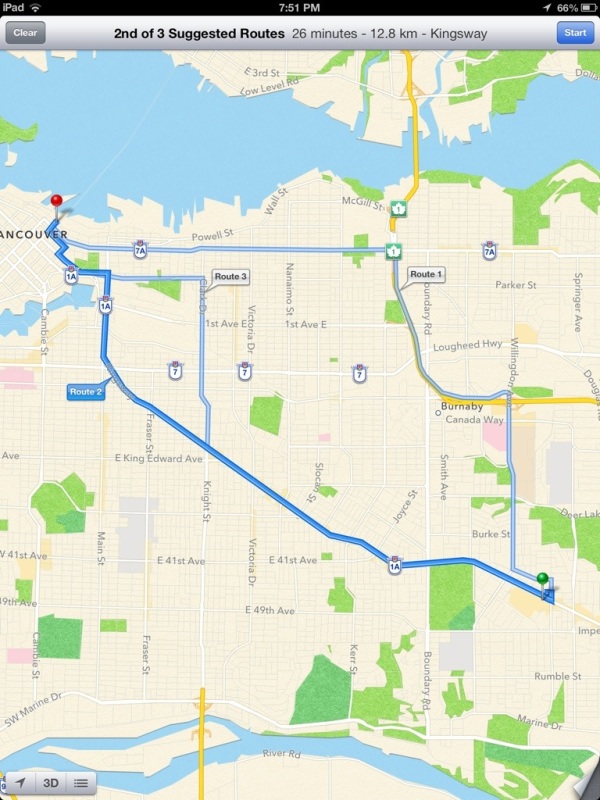 The map view looked alright to me. However, to be more accurate, I looked at the list view:

What I liked about the Apple Maps (list view) was that Nelson St, Hazel St, and Miller Ave were displayed. Depending upon where exactly the user was, one of the streets would be visible within 100-150 meters. Apple maps took me through the Dunsmuir viaduct and finally Cambie St, Pender St, and Seymour St directly into Downtown Core. As a person who lives here, the route looked alright to me. 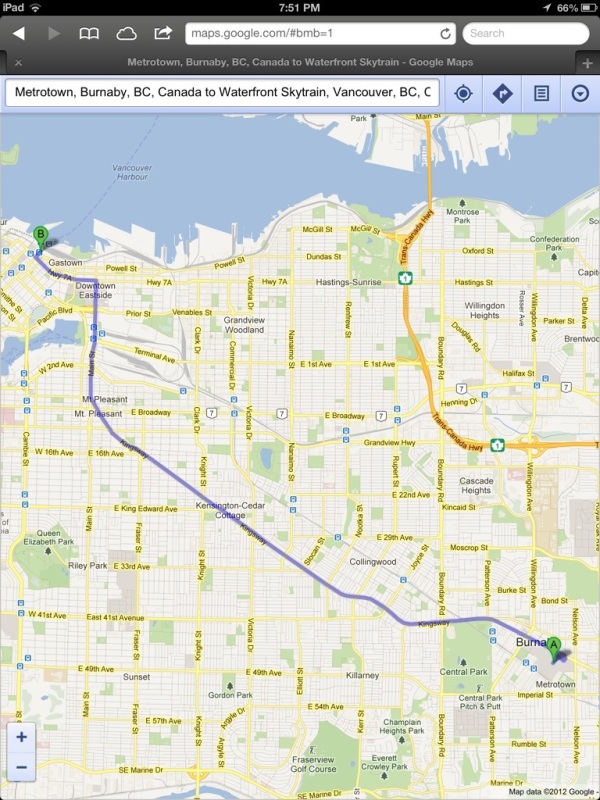 Apple Maps seemed to be taking a slightly different route, but at first glance, neither route is glaringly incorrect. Google Maps was taking another route via Main St and Hastings St to Seymour St and finally to Downtown Core. In the Google Maps route, the first step struck me as strange. Google Maps tells the user ‘Head Northeast’. How is the user supposed to know what Northeast is? Unless the user is holding a compass, it is not user-friendly to say head in a particular direction.

Both routes are correct. However, here are the differences:

Aside from the above differences both Apple and Google maps seem to be quite accurate. Considering the fact that Apple Maps is just the first version and the error-reporting is crowd-sourced, I am sure the accuracy of the maps will improve as users use them more and more.

As for the errors like collapsed bridges and non-existent landmarks, Apple has no option but to fix them as soon as possible.

One thought on “Apple Maps vs. Google Maps – a user’s perspective”

The Digital Dimension of Photography

Thanks to visitors from: